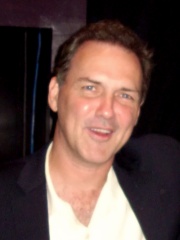 Norman Gene Macdonald (October 17, 1959 – September 14, 2021) was a Canadian stand-up comedian, actor, and writer who was known for his style of deadpan humor and interjecting poetic, sometimes old-fashioned turns of phrase. Throughout his career, he appeared in numerous films and was a regular favorite comedian panelist of talk show hosts, with many critics considering him to be the ultimate late-night comedy guest.Early in his career, Macdonald's first work in television included writing for such comedies as Roseanne and The Dennis Miller Show. In 1993, Macdonald was hired as a writer and cast member on Saturday Night Live (SNL), spending a total of five seasons on the series, which included anchoring the show's Weekend Update segment for three and a half seasons. Read more on Wikipedia

Among comedians, Norm Macdonald ranks 75 out of 90. Before him are Sinbad, Mindy Kaling, Margaret Cho, B. J. Novak, Andrew Dice Clay, and Dolphy. After him are Tim Meadows, Nick Swardson, Bill Burr, Gabriel Iglesias, Dane Cook, and Kristen Schaal.

Among COMEDIANS In Canada

Among comedians born in Canada, Norm Macdonald ranks 2. Before him are Howie Mandel (1955).