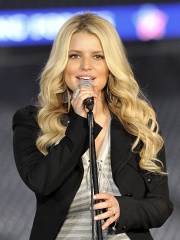 Jessica Ann Johnson (née Simpson; born July 10, 1980) is an American singer, actress, fashion designer, and author. After performing in church choirs as a child, Simpson signed with Columbia Records in 1997, at age 16. Her debut studio album, Sweet Kisses (1999), sold two million copies in the United States and saw the commercial success of the single "I Wanna Love You Forever". Read more on Wikipedia

Since 2007, the English Wikipedia page of Jessica Simpson has received more than 7,433,890 page views. Her biography is available in 60 different languages on Wikipedia making her the 1,085th most popular singer.

Among singers, Jessica Simpson ranks 1,089 out of 3,001. Before her are Idir, Prodigy, Viktor Lazlo, Yoko Kanno, Marilyn Miller, and Grigory Leps. After her are Dany Dauberson, Kenan Doğulu, The Weeknd, Gary Numan, Darlene Love, and Sergey Lazarev.