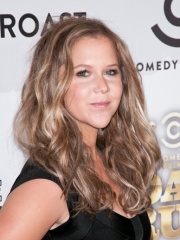 Amy Beth Schumer (born June 1, 1981) is an American stand-up comedian and actress. She ventured into comedy in the early 2000s before appearing as a contestant on the fifth season of the NBC reality competition series Last Comic Standing in 2007. Read more on Wikipedia

Since 2007, the English Wikipedia page of Amy Schumer has received more than 15,867,325 page views. Her biography is available in 30 different languages on Wikipedia making her the 5,348th most popular comedian.

Among comedians, Amy Schumer ranks 57 out of 8. Before her are David Cross, Patton Oswalt, Amy Poehler, Jordan Peele, Amy Sedaris, and Bill Hicks. After her are Cedric the Entertainer, Jemaine Clement, Fred Armisen, Jeff Dunham, Kathy Griffin, and Dave Chappelle.