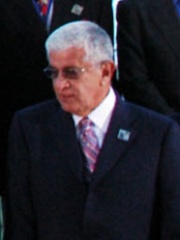 Luis Alfredo Palacio González (born January 22, 1939) is an Ecuadorian cardiologist and former politician who served as President of Ecuador from April 20, 2005 to January 15, 2007. Read more on Wikipedia

Since 2007, the English Wikipedia page of Alfredo Palacio has received more than 63,861 page views. His biography is available in 33 different languages on Wikipedia making him the 8,015th most popular politician.

Among politicians, Alfredo Palacio ranks 7,974 out of 14,801. Before him are Leopoldo O'Donnell, 1st Duke of Tetuán, Ashur-nadin-shumi, Peter the Patrician, Hosokawa Tadaoki, Augusta of Denmark, and Adolphus Frederick VI, Grand Duke of Mecklenburg-Strelitz. After him are Sobekemsaf II, Elisabetta Gonzaga, Dirk III, Count of Holland, Pertevniyal Sultan, Godepert, and Floris II, Count of Holland.