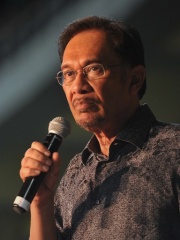 Dato' Seri Haji Anwar bin Ibrahim (Jawi: أنوار بن إبراهيم; Malay pronunciation: [änwär ɪbrähɪm]; born 10 August 1947) is a Malaysian politician who has served as the 12th and 16th Leader of the Opposition since May 2020 and from August 2008 to March 2015, 2nd Chairman of the Pakatan Harapan (PH) coalition since February 2020 and 2nd President of the People's Justice Party (PKR) since November 2018. He has also served as Member of Parliament (MP) for Port Dickson since October 2018. Read more on Wikipedia

Among politicians, Anwar Ibrahim ranks 9,844 out of 15,710. Before him are Beatrice of England, Polina Astakhova, Arechis II of Benevento, Dragan Čović, Yemelyan Yaroslavsky, and Egbert II, Margrave of Meissen. After him are Jacques Georges, Sa'dun Hammadi, Driss Jettou, Olga Benário Prestes, Anaxander, and Justas Paleckis.