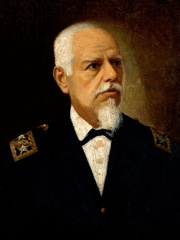 José Eloy Alfaro Delgado (June 25, 1842 – January 28, 1912) was an Ecuadorian politician who served as the President of Ecuador from 1895 to 1901 and from 1906 to 1911. Alfaro became one of the strongest opponents of pro-Catholic conservative President Gabriel Garcia Moreno (1821–1875) and was known as the Viejo Luchador ("Old Warrior") for playing a central role in the Liberal Revolution of 1895 and having fought conservatism for almost 30 years. Alfaro's major political legacies are considered to be strengthened national unity, securing the integrity of Ecuador's borders, the increased secularization of the country. Read more on Wikipedia

Since 2007, the English Wikipedia page of Eloy Alfaro has received more than 97,741 page views. His biography is available in 23 different languages on Wikipedia making him the 8,438th most popular politician.

Among politicians, Eloy Alfaro ranks 8,396 out of 14,801. Before him are Élie, duc Decazes, Ariarathes VI of Cappadocia, Ramaswamy Venkataraman, Marcus Claudius Marcellus, Hong Tianguifu, and Luigi Longo. After him are Cniva, Trebonius, Henry Percy, Sosurim of Goguryeo, Pietro Grimani, and Yekuno Amlak.