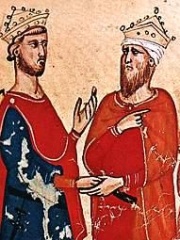 Al-kamil, also known as al-Malik al-Kamil, was the last of the Ayyubid sultans. He is famous for being the ruler who accepted the surrender of Jerusalem to the Crusaders in 1244, ending the Ayyubid dynasty's rule over the city.

Page views of Al-Kamils by language

Among politicians, Al-Kamil ranks 2,988 out of 15,710. Before him are Alexander Jannaeus, Emperor Shenzong of Song, August Landmesser, Lars Porsena, Mstislav I of Kiev, and Marie Louise Gonzaga. After him are Cola di Rienzo, Zhao Bing, Antiochus V Eupator, Demaratus, Ercole II d'Este, Duke of Ferrara, and Eleanor of Navarre.

Among people born in 1177, Al-Kamil ranks 3. Before him are Baldwin V of Jerusalem and Philip of Swabia. After him is Blanche of Navarre, Countess of Champagne. Among people deceased in 1238, Al-Kamil ranks 1. After him are Henry the Bearded, Yuri II of Vladimir, Guillaume de Lorris, John I of Trebizond, and Joan of England, Queen of Scotland.