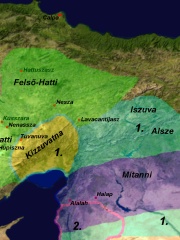 Zidanta I was a king of the Hittites (Old Kingdom), ruling for 10 years, ca. 1496–1486 BC (short chronology timeline). According to the Telepinu Proclamation, this king became a ruler by murder.Zidanta was married to the daughter of Hantili, brother-in-law to King Mursili I. Zidanta encouraged and helped Hantili to kill Mursili and seize the throne. Read more on Wikipedia

Since 2007, the English Wikipedia page of Zidanta I has received more than 15,297 page views. His biography is available in 25 different languages on Wikipedia. Zidanta I is the 5,402nd most popular politician (down from 5,005th in 2019).

Page views of Zidanta IS by language

Among politicians, Zidanta I ranks 5,402 out of 15,710. Before him are Vladislaus I, Duke of Bohemia, Antiochus I Theos of Commagene, Ugolino della Gherardesca, Cornelia Salonina, Bakenranef, and Duke Anthony Ulrich of Brunswick. After him are Rezső Kasztner, Princess Alexandrine of Baden, François-Michel le Tellier, Marquis de Louvois, Shote Galica, Ansprand, and Tulga.