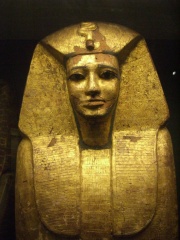 Sekhemre-Wepmaat Intef (or Antef, Inyotef) was an Egyptian king of the Seventeenth Dynasty of Egypt, who lived late during the Second Intermediate Period, when Egypt was divided into two by Hyksos controlled Lower Egypt and Theban ruled Upper Egypt. Sekhemre-Wepmaat Intef is sometimes referred to as Intef V, and sometimes as Intef VI. His nomen, Intef-aa, translates as "His father brought him, the great" or "Intef, the great."He ruled from Thebes and was probably buried in a tomb in the necropolis. Read more on Wikipedia