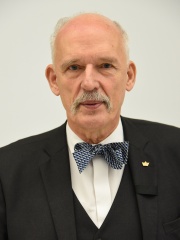 Janusz Ryszard Korwin-Mikke (Polish: [ˈjanuʂ ˈkɔrvʲin ˈmʲikkɛ]; born 27 October 1942), also known by his initials JKM or simply as Korwin, is a Polish far-right politician, paleolibertarian and author. He was a member of the European Parliament from 2014 until 2018. He was the leader of the Congress of the New Right (KNP), which was formed in 2011 from Liberty and Lawfulness, which he led from its formation in 2009, and the Real Politics Union (Unia Polityki Realnej), which he led from 1990 to 1997 and from 1999 to 2003. Read more on Wikipedia

Among politicians, Janusz Korwin-Mikke ranks 6,881 out of 15,710. Before him are Daru of Baekje, Jorge Eliécer Gaitán, Princess Margaret Yolande of Savoy, Zénaïde Bonaparte, Agron, and Albert I, Duke of Saxony. After him are Princess Françoise of Orléans, Menkare, Lamberto Dini, Shukri al-Quwatli, T. V. Soong, and Louis Botha.