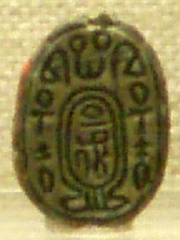 Apepi (also Ipepi; Egyptian language ipp(i)), Apophis (Greek: Ἄποφις); regnal names Neb-khepesh-Re, A-qenen-Re and A-user-Re) was a ruler of Lower Egypt during the Fifteenth Dynasty and the end of the Second Intermediate Period that was dominated by this foreign dynasty of rulers called the Hyksos. According to the Turin Canon of Kings, he ruled over the northern portion of Egypt for forty years. He ruled during the early half of the 16th century BC and outlived his southern rival, Kamose, but not Ahmose I. Read more on Wikipedia

Since 2007, the English Wikipedia page of Apepi has received more than 19,970 page views. His biography is available in 29 different languages on Wikipedia. Apepi is the 2,748th most popular politician (down from 2,664th in 2019), the 142nd most popular biography from Egypt (up from 145th in 2019) and the 66th most popular Egyptian Politician.

Apepi is most famous for being the last king of the Fifth Dynasty. He was a weak king who reigned for only three years.

Page views of Apepis by language

Among politicians, Apepi ranks 2,748 out of 15,710. Before him are Philip I, Landgrave of Hesse, Colin Powell, Taharqa, John William Friso, Prince of Orange, Mozaffar ad-Din Shah Qajar, and Julius Schreck. After him are Mentuhotep I, Pelopidas, Eduard Limonov, Mohamed Hussein Tantawi, Erna Solberg, and Franz I, Prince of Liechtenstein.