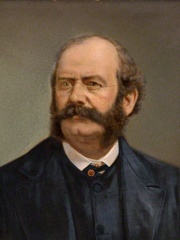 William Burges (; 2 December 1827 – 20 April 1881) was an English architect and designer. Among the greatest of the Victorian art-architects, he sought in his work to escape from both nineteenth-century industrialisation and the Neoclassical architectural style and re-establish the architectural and social values of a utopian medieval England. Read more on Wikipedia

Since 2007, the English Wikipedia page of William Burges has received more than 204,422 page views. Her biography is available in 16 different languages on Wikipedia making her the 342nd most popular architect.