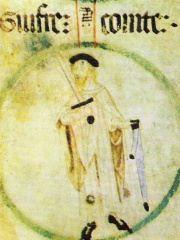 Wilfred II (or Borrell I) (Wifredo II Borrell I in Spanish) (Guifré II Borrell I in Catalan), also known as "Wifred" and/or "Borrel", was count of Barcelona, Girona, and Ausona from 897 to 911, after his father, Wilfred I the Hairy. His mother was Guinedilda. At his father's death, the patrimony was divided between his sons Wilfred ΙΙ, Sunifred ΙΙ, Miró and Sunyer. Read more on Wikipedia

Since 2007, the English Wikipedia page of Wifred II, Count of Barcelona has received more than 9,038 page views. His biography is available in 15 different languages on Wikipedia making him the 7,510th most popular politician.

Page views of Wifred II, Count of Barcelonas by language

Among politicians, Wifred II, Count of Barcelona ranks 7,467 out of 14,801. Before him are Fatali Khan Khoyski, Hyperbolus, Ross Perot, Manuel I of Trebizond, Girolamo Aleandro, and Damat Ferid Pasha. After him are Telets of Bulgaria, Bernd Rosemeyer, Vykintas, Emilio Colombo, Ho Feng-Shan, and Hermann I, Landgrave of Thuringia.