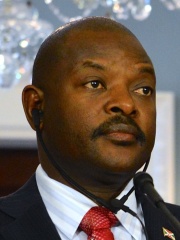 Pierre Nkurunziza (18 December 1964 – 8 June 2020) was a Burundian politician who served as the ninth president of Burundi for almost 15 years from August 2005 until his death in June 2020. A member of the Hutu ethnic group, Nkurunziza taught physical education before becoming involved in politics during the Burundian Civil War as part of the rebel National Council for the Defense of Democracy – Forces for the Defense of Democracy (Conseil National Pour la Défense de la Démocratie – Forces pour la Défense de la Démocratie, CNDD–FDD) of which he became leader in 2000. The CNDD–FDD became a political party at the end of the Civil War and Nkurunziza was elected president. Read more on Wikipedia

Among politicians, Pierre Nkurunziza ranks 6,369 out of 15,710. Before him are Emperor Kōkō, Georg Ritter von Schönerer, Emperor Daigo, Wolfgang Wilhelm, Count Palatine of Neuburg, Ebroin, and Xiao Xin. After him are Margareta of Romania, Mithridates II of Pontus, Sardanapalus, Annegret Kramp-Karrenbauer, Masaharu Homma, and Baibars II.

Others born in Burundi

Among POLITICIANS In Burundi