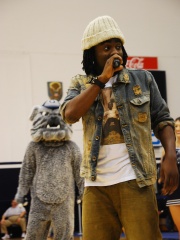 Olubowale Victor Akintimehin (born September 21, 1984), better known by his stage name Wale ( WAH-lay), is an American rapper and songwriter. He first rose to prominence in 2006, when his song "Dig Dug (Shake It)" became popular in his hometown. Wale became locally recognized and continued recording music for the regional audience. Read more on Wikipedia

Since 2007, the English Wikipedia page of Wale has received more than 264,169 page views. His biography is available in 19 different languages on Wikipedia making him the 2,935th most popular singer.

Page views of Wales by language

Among singers, Wale ranks 2,950 out of 3,001. Before him are Christina Metaxa, Melanie Fiona, Roksana Węgiel, Paul Wall, Mai Hagiwara, and Lil Yachty. After him are Fatin Shidqia, Laura Omloop, Mike Will Made It, Giannis Karagiannis, Nicola Roberts, and Prakash Neupane.