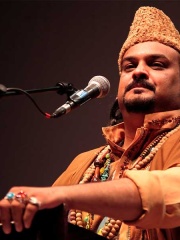 Amjad Farid (Fareed) Sabri (23 December 1970 – 22 June 2016) was a Pakistani qawwal, naat khawan and a proponent of the Sufi Muslim tradition. Son of Ghulam Farid Sabri and nephew of Maqbool Ahmed Sabri of the Sabri Brothers, he emerged as one of South Asia's most prominent qawwali singers, often reciting poems written by his father and uncle. He was shot dead in Karachi in a targeted killing. Read more on Wikipedia

Since 2007, the English Wikipedia page of Amjad Sabri has received more than 643,808 page views. His biography is available in 18 different languages on Wikipedia making him the 2,893rd most popular singer.

Among singers, Amjad Sabri ranks 2,908 out of 3,001. Before him are Chet Faker, Rebecca Ferguson, Kim Cesarion, Ace Hood, Mizuki Fukumura, and Anja Nissen. After him are Cashis, Thea Garrett, Kiiara, Ella Eyre, Chance the Rapper, and Plies.

Among SINGERS In Pakistan