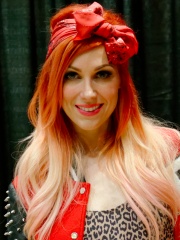 Bonnie McKee (born January 20, 1984) is an American singer and songwriter. Her debut album, Trouble, was released in September 2004 under Reprise Records. After being dropped by Reprise several years after its release, McKee had taken a musical hiatus before establishing a name for herself as a songwriter. Read more on Wikipedia

Since 2007, the English Wikipedia page of Bonnie McKee has received more than 436,068 page views. Her biography is available in 23 different languages on Wikipedia making her the 2,840th most popular singer.

Among singers, Bonnie McKee ranks 2,855 out of 3,001. Before her are Stevan Faddy, Jason Aldean, Anita Simoncini, Jhené Aiko, Jay Rock, and Christabelle Borg. After her are Hersi Matmuja, Tamia, Sandhja, Iris, Amos Lee, and Glen Vella.