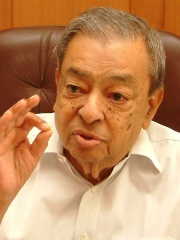 Verghese Kurien (26 November 1921 – 9 September 2012), known as the "Father of the White Revolution" in India, was a social entrepreneur whose "billion-litre idea", Operation Flood, made dairy farming India's largest self-sustaining industry and the largest rural employment sector providing a third of all rural income. It made India the world's largest milk producer, doubled the milk available for each person, and increased milk output four-fold in 30 years.He pioneered the Anand model of dairy cooperatives and replicated it nationwide, based on various "top-down" and "bottom-up" approaches, where no milk from a farmer was refused and 70–80% of the price by consumers was paid in cash to dairy farmers who controlled the marketing, procurement, and processing of milk and milk products as the dairy's owners. Read more on Wikipedia

Among ENGINEERS In India