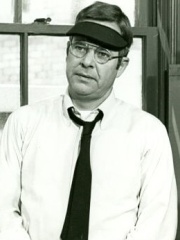 William Windom (September 28, 1923 – August 16, 2012) was an American actor. He played a wide variety of roles in both film and television during a near 60-year career, but is perhaps best known for his role as cartoonist John Monroe in the short-lived comedy My World and Welcome to It (1969–1970) winning him a Primetime Emmy Award, and his recurring role as Dr. Seth Hazlitt starring alongside Angela Lansbury in Murder, She Wrote (1984-1996). Windom was also known for his prolific work in television appearing in such shows as Star Trek, The Twilight Zone, Columbo, Gunsmoke, Mission: Impossible, Magnum, P.I., Newhart, and L.A. Read more on Wikipedia

Since 2007, the English Wikipedia page of William Windom has received more than 84,188 page views. His biography is available in 19 different languages on Wikipedia making him the 3,248th most popular actor.