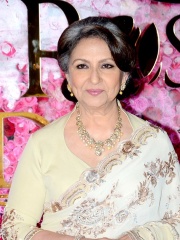 Sharmila Tagore (born 8 December 1944) is a retired Indian actress. Primarily known for her work in Hindi and Bengali cinema, Tagore is the recipient of two National Film Awards, a Filmfare Award, and the Filmfare Lifetime Achievement Award for her contributions to Hindi cinema. In 2013, the Government of India, honoured her with Padma Bhushan, India's third highest civilian honour for her contributions to the Indian culture through performing arts.Born into the prominent Tagore family, one of the leading families of Calcutta and a key influence during the Bengali Renaissance, Tagore made her acting debut at age 14 with Satyajit Ray's acclaimed Bengali drama The World of Apu (1959). Read more on Wikipedia