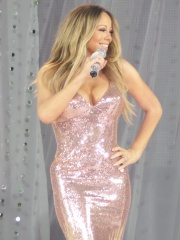 Mariah Carey (; born March 27, 1969) is an American singer, songwriter, actress, and record producer. Referred to as the "Songbird Supreme" and "Queen of Christmas", she is noted for her five-octave vocal range, melismatic singing style, signature use of the whistle register, and songwriting. Carey rose to fame in 1990 with her eponymous debut album. Read more on Wikipedia

Among singers, Mariah Carey ranks 224 out of 3,528. Before her are The Singing Nun, Boris Christoff, Connie Francis, Nena, Mario Lanza, and Sezen Aksu. After her are Susan Boyle, Debbie Harry, Omara Portuondo, Lil Wayne, Tito Gobbi, and Renata Scotto.