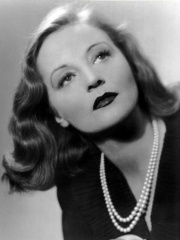 Tallulah Brockman Bankhead (January 31, 1902 – December 12, 1968) was an American actress of the stage and screen. Bankhead was a member of the Brockman Bankhead family, a prominent Alabama political family; her grandfather and uncle were U.S. Senators and her father served as an 11-term member of Congress, the final two as Speaker of the House of Representatives. Tallulah's support of liberal causes such as civil rights broke with the tendency of the Southern Democrats to support a more typically aligned agenda, and she often opposed her own family publicly.Primarily an actress of the stage, Bankhead did have one hit film—Alfred Hitchcock's Lifeboat (1944) —as well as a brief but successful career on radio. Read more on Wikipedia

Since 2007, the English Wikipedia page of Tallulah Bankhead has received more than 2,498,066 page views. Her biography is available in 29 different languages on Wikipedia making her the 1,757th most popular actor.