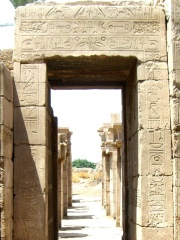 Hedjkheperre Setepenre Takelot II Si-Ese was a pharaoh of the Twenty-third Dynasty of Ancient Egypt in Middle and Upper Egypt. He has been identified as the High Priest of Amun Takelot F, son of the High Priest of Amun Nimlot C at Thebes and, thus, the son of Nimlot C and grandson of king Osorkon II according to the latest academic research. Based on two lunar dates belonging to Takelot II, this Upper Egyptian pharaoh is today believed to have ascended to the throne of a divided Egypt in either 845 BC or 834 BC. Most Egyptologists today, including Aidan Dodson, Gerard Broekman, Jürgen von Beckerath, M.A. Leahy and Karl Jansen-Winkeln, also accept David Aston's hypothesis that Shoshenq III was Osorkon II's actual successor at Tanis, rather than Takelot II. Read more on Wikipedia

Takelot II is most famous for being the king who ruled during the time of the Amarna period.

Among politicians, Takelot II ranks 4,265 out of 15,710. Before him are Ernst Johann von Biron, José Gervasio Artigas, Pontiac, Amadeus VI, Count of Savoy, Jindeok of Silla, and Zhu Youlang. After him are Andocides, Sisowath Monivong, Bolesław II the Generous, Bogd Khan, Yang You, and Terauchi Masatake.

Others Deceased in 825 BC