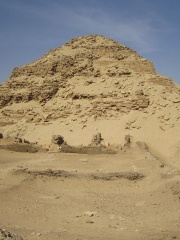 Neferirkare Kakai (known in Greek as Nefercherês, Νεφερχέρης) was an ancient Egyptian pharaoh, the third king of the Fifth Dynasty. Neferirkare, the eldest son of Sahure with his consort Meretnebty, was known as Ranefer A before he came to the throne. He acceded the day after his father's death and reigned for eight to eleven years, sometime in the early to mid-25th century BCE. He was himself very likely succeeded by his eldest son, born of his queen Khentkaus II, the prince Ranefer B who would take the throne as king Neferefre. Read more on Wikipedia

Since 2007, the English Wikipedia page of Neferirkare Kakai has received more than 194,316 page views. His biography is available in 36 different languages on Wikipedia making him the 158th most popular nobleman.

Among noblemen, Neferirkare Kakai ranks 147 out of 559. Before him are Giovanni Borgia, 2nd Duke of Gandia, Avidius Cassius, Isabella I of Jerusalem, Alfonso I d'Este, Duke of Ferrara, Francis, Duke of Saxe-Coburg-Saalfeld, and Mariana of Austria. After him are Archduchess Anna of Austria, Sorghaghtani Beki, Caroline, Princess of Hanover, Grand Duchess Maria Alexandrovna of Russia, Louise Élisabeth of France, and Carlota Joaquina of Spain.