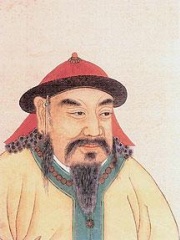 Since 2007, the English Wikipedia page of Yesugei has received more than 201,234 page views. His biography is available in 27 different languages on Wikipedia. Yesugei is the 1,388th most popular politician (down from 1,271st in 2019).

Yesugei is most famous for being the father of Genghis Khan.

Page views of Yesugeis by language

Among politicians, Yesugei ranks 1,388 out of 15,710. Before him are Christopher of Bavaria, Carloman of Bavaria, Emperor Yang of Sui, Jeongjong of Joseon, Pachacuti, and Chilperic I. After him are Conrad of Montferrat, Ivan Mazepa, Hongxi Emperor, Haakon Sigurdsson, Llywelyn ap Gruffudd, and Genrikh Yagoda.

Among people born in 1134, Yesugei ranks 1. After him are Sancho III of Castile, Basava, Theodora Komnene, Duchess of Austria, Raymond V, Count of Toulouse, Conrad, Count Palatine of the Rhine, Margaret of Navarre, and Geoffrey, Count of Nantes. Among people deceased in 1171, Yesugei ranks 1. After him are Al-Adid, Philip of Milly, Baldwin IV, Count of Hainaut, Conan IV, Duke of Brittany, Henry of Blois, and Diarmait Mac Murchada.