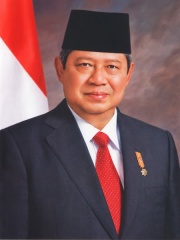 Susilo Bambang Yudhoyono (born 9 September 1949), commonly referred to by his initials SBY, is an Indonesian politician and retired army general who served as the sixth president of Indonesia from 2004 to 2014. A member of the Democratic Party of Indonesia, he served as the 4th leader of the Democratic Party from 2014 until 2020, 8th and 10th coordinating minister of politics and security affairs of Indonesia from 2000 until 2001, and again from 2001 until 2004. He also served as the president of the Assembly and chair of the Council of the Global Green Growth Institute. Read more on Wikipedia

Susilo Bambang Yudhoyono is most famous for being the president of Indonesia from 2004 to 2014.

Among politicians, Susilo Bambang Yudhoyono ranks 3,252 out of 15,710. Before him are James Macpherson, Philip III of Navarre, Lluís Llach, Charles Emmanuel II, Duke of Savoy, Georges Ernest Boulanger, and Richard I of Normandy. After him are Halsten Stenkilsson, Sundiata Keita, Antigonus II Mattathias, Thesh, Richard III, Duke of Normandy, and Maria Leopoldine of Austria.