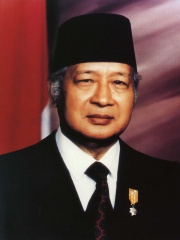 Suharto (; Indonesian pronunciation ; 8 June 1921 – 27 January 2008) was an Indonesian army officer and politician, who served as the second and the longest serving president of Indonesia. Widely regarded as a military dictator by international observers, Suharto led Indonesia through a dictatorship for 31 years, from the fall of Sukarno in 1967 until his own resignation in 1998. The legacy of his 31-year rule, and his US$38 billion net worth, is still debated at home and abroad.Suharto was born in the small village of Kemusuk, in the Godean area near the city of Yogyakarta, during the Dutch colonial era. Read more on Wikipedia

Page views of Suhartos by language

Among politicians, Suharto ranks 617 out of 15,710. Before him are Nebuchadnezzar I, Edmund Burke, Epaminondas, Ptolemy XIV of Egypt, Claudius Gothicus, and Nurhaci. After him are Vidkun Quisling, Arthur Seyss-Inquart, Emperor Jimmu, Catiline, Mobutu Sese Seko, and Valentinian I.