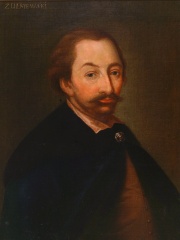 Stanisław Żółkiewski (Polish pronunciation: [staˈɲiswaf ʐuwˈkʲɛfskʲi]; 1547 – 7 October 1620) was a Polish nobleman of the Lubicz coat of arms, magnate, military commander and a chancellor of the Polish crown of the Polish–Lithuanian Commonwealth, who took part in many campaigns of the Commonwealth and on its southern and eastern borders. He occupied a number of high-ranking posts in the administration of the Commonwealth, including castellan of Lwów (from 1590), voivod of the Kiev Voivodeship and Great Chancellor of the Crown (from 1618). From 1588 he was also a Field Crown Hetman, and in 1618 was promoted to Grand Hetman of the Crown. Read more on Wikipedia

Among people born in 1547, Stanisław Żółkiewski ranks 7. Before him are Miguel de Cervantes, John of Austria, Claude of France, Justus Lipsius, Joanna of Austria, Grand Duchess of Tuscany, and Johan van Oldenbarnevelt. After him are Oichi, Sanada Masayuki, Bahāʾ al-dīn al-ʿĀmilī, Mateo Alemán, Rudolph Goclenius, and Philipp Ludwig, Count Palatine of Neuburg. Among people deceased in 1620, Stanisław Żółkiewski ranks 6. Before him are Simon Stevin, Wanli Emperor, Mahfiruz Hatun, William Adams, and Taichang Emperor. After him are Louise de Coligny, Archduchess Eleanor of Austria, and Thomas Campion.