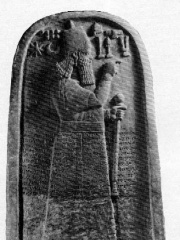 Adad-nārārī I, rendered in all but two inscriptions ideographically as mdadad-ZAB+DAḪ, meaning “Adad (is) my helper,” (1307–1275 BC or 1295–1263 BC short chronology) was a king of Assyria during the Middle Assyrian Empire. He is the earliest Assyrian king whose annals survive in any detail. Adad-nārārī I achieved major military victories that further strengthened Assyria. Read more on Wikipedia

Adad-nirari I was most famous for his military campaigns in the west, where he campaigned against the Assyrians, the Urartians, and the Hittites.

Page views of Adad-nirari IS by language

Among politicians, Adad-nirari I ranks 4,191 out of 15,710. Before him are Óscar Carmona, Abdul Halim of Kedah, Chindasuinth, Prusias I of Bithynia, Lucius Antonius, and Francesco II Gonzaga, Marquess of Mantua. After him are Emperor Shun of Han, Magnus IV of Norway, Emperor Ankō, Ernst vom Rath, Istakhri, and Piali Pasha.