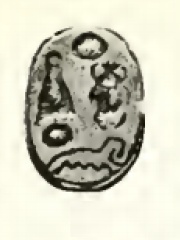 Hedjkheperre Setepenre Smendes was the founder of the Twenty-first Dynasty of Egypt and succeeded to the throne after burying Ramesses XI in Lower Egypt – territory which he controlled. His Egyptian nomen or birth name was actually Nesbanebdjed meaning "He of the Ram, Lord of Mendes", but it was translated into Greek as Smendes by later classical writers such as Josephus and Sextus Africanus. Read more on Wikipedia

Smerdis was most famous for being a usurper of the Persian throne.

Page views of Smendes by language

Among politicians, Smendes ranks 2,687 out of 15,710. Before him are Valdas Adamkus, Francis III, Duke of Brittany, José Manuel Barroso, Ahmad Shah Durrani, Pehr Evind Svinhufvud, and Zimri. After him are Muršili II, Menua, Ildibad, Thaïs, Dionysius II of Syracuse, and Louis Auguste, Duke of Maine.