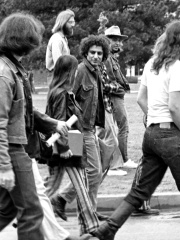 Abbot Howard Hoffman (November 30, 1936 – April 12, 1989), better known as Abbie Hoffmann, was an American political and social activist, anarchist, socialist, and revolutionary who co-founded the Youth International Party ("Yippies"). He was also a leading proponent of the Flower Power movement. Hoffman was arrested and tried for conspiracy and inciting to riot as a result of his role in protests that led to violent confrontations with police during the 1968 Democratic National Convention, along with Jerry Rubin, David Dellinger, Tom Hayden, Rennie Davis, John Froines, Lee Weiner, and Bobby Seale. Read more on Wikipedia

Since 2007, the English Wikipedia page of Abbie Hoffman has received more than 1,889,778 page views. His biography is available in 21 different languages on Wikipedia making him the 266th most popular social activist.