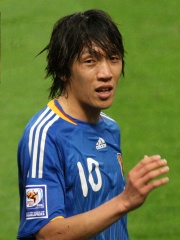 Shunsuke Nakamura (中村 俊輔, Nakamura Shunsuke, born 24 June 1978) is a Japanese professional footballer who plays as an attacking midfielder for Yokohama FC in J1 League. He is the only person to have been named J.League Most Valuable Player more than once, receiving the award in 2000 and 2013. He is well known for his vision, touch, bending shots and free kick-taking abilities; Steve Perryman once remarked that Nakamura "could open a tin of beans with his left foot".Nakamura began his professional career with J1 League club Yokohama Marinos in 1997, eventually making 338 league appearances during two spells at the club totaling just over twelve seasons. Read more on Wikipedia