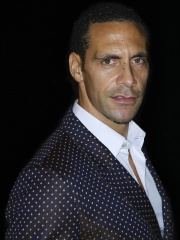 Rio Gavin Ferdinand (born 7 November 1978) is an English former professional footballer who played as a centre-back, and is now a television pundit for BT Sport. He played 81 times for the England national team between 1997 and 2011, and was a member of three FIFA World Cup squads. He is one of the most decorated English footballers of all time and regarded by many as one of England's greatest ever players.Ferdinand began his football career playing for various youth teams, finally settling at West Ham United where he progressed through the youth ranks and made his professional Premier League debut in 1996. Read more on Wikipedia