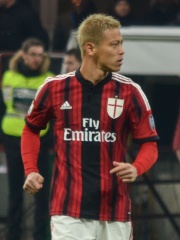 Keisuke Honda (本田 圭佑, Honda Keisuke, born 13 June 1986) is a Japanese professional football player who recently played for FK Sūduva in the A Lyga, and he is also general manager and coach of the Cambodia national team.A versatile player, he usually plays as an attacking midfielder, but he can equally play as a winger, a false nine or as a deep-lying playmaker, and frequently featured as a right winger for Milan during the 2014–15 Serie A season. A quick, creative, strong, and useful player, he is also known for his accuracy from bending free-kicks, powerful striking ability from distance, dribbling skills, and delivery as a set piece specialist. He has earned over 90 international caps between 2008 and 2018, playing at the 2010, 2014 and 2018 World Cups. Read more on Wikipedia