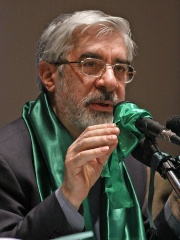 Mir-Hossein Mousavi Khameneh (Persian: میرحسین موسوی خامنه‎, romanized: Mīr-Hoseyn Mūsavī Khāmené, pronounced [miːɾ hoˈsɛjn ɛ muːsæˈviː jɛ xɑːmɛˈnɛ]; born 2 March 1942) is an Iranian reformist politician, artist and architect who served as the seventy-ninth and last Prime Minister of Iran from 1981 to 1989. He was a reformist candidate for the 2009 presidential election and eventually the leader of the opposition in the post-election unrest. Mousavi served as the president of the Iranian Academy of Arts until 2009, when Conservative authorities removed him.In the early years of the revolution, Mousavi was the editor-in-chief of Jomhouri-e Eslami, the official newspaper of the Islamic Republican Party, before being elevated to Minister of Foreign Affairs and eventually the post of Prime Minister. Read more on Wikipedia