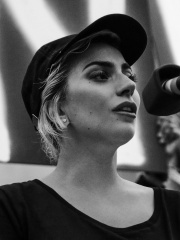 Stefani Joanne Angelina Germanotta ( STEF-ən-ee JUR-mə-NOT-ə; born March 28, 1986), known professionally as Lady Gaga, is an American singer, songwriter, and actress. She is known for her image reinventions and musical versatility. Gaga began performing as a teenager, singing at open mic nights, and acting in school plays. Read more on Wikipedia

Lady Gaga is most famous for her music and her style. She is a singer and songwriter, and she has been nominated for many awards.

The Cut
I Think About This a Lot: Lady Gaga Edition
Talented, brilliant, incredible, amazing, show-stopping, spectacular, never the same, totally unique, completely not ever been done before …
the Cut
Egotastic.com
Lady Gaga Talks Method Acting!
Lady Gaga has made her way over to The Late Show to talk to Stephen Colbert about the process of filming hew new movie House of Gucci. The actress spoke about how she used method acting to really become the character and how she basically kept her horrible It…
Echo Lawrence
Daily Mail
British designer reveals how she turned Lady Gaga into Patrizia Reggiani for new Gucci film
From a virginal bridal gown to sizzling skiwear, the film has its leading lady - Lady Gaga as jealous and killer ex-wife Patrizia Reggiani - tripping a veritable catwalk of style across the big screen.
Beth Hale
Dazed
Fashion killer: House of Gucci’s costume designer talks dressing Lady Gaga
As the long-awaited movie finally lands in cinemas, Janty Yates discusses working collaboratively with ‘LG’, steering clear of Dynasty-era Joan Collins, and running riot in the Gucci archives
Emma Elizabeth Davidson