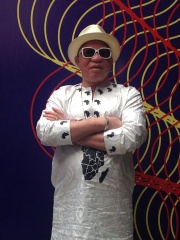 Salif Keïta (IPA: [salif keita]) (born August 25, 1949) is an afro-pop singer-songwriter from Mali. He is notable not only because of his reputation as the "Golden Voice of Africa" but also because he has albinism. Read more on Wikipedia

Since 2007, the English Wikipedia page of Salif Keita has received more than 404,887 page views. His biography is available in 41 different languages on Wikipedia making him the 306th most popular musician.