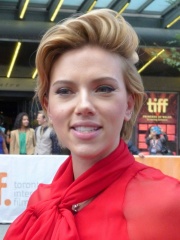 Scarlett Ingrid Johansson (; born November 22, 1984) is an American actress. She was the world's highest-paid actress in 2018 and 2019, and has featured multiple times on the Forbes Celebrity 100 list. Her films have grossed over $14.3 billion worldwide, making Johansson the ninth-highest-grossing box office star of all time. Read more on Wikipedia

Scarlett Johansson is most famous for playing the role of Black Widow in the Marvel Cinematic Universe.

The A.V. Club
Groups denounce Disney's Scarlett Johansson response as a "gendered character attack"
Times Up, ReFrame, and Women In Film have issued a joint statement today, voicing their support for actor Scarlett Johansson, and labeling Disney’s attempts to counter her recent lawsuit against the company as “a gendered character attack.” Although they make…
William Hughes
Bloomberg
Scarlett Johansson Wants Some of That Disney+ Money
Music festivals are selling out all over the country, and artists are fighting one another for dates.
Lucas Shaw
/FILM
Women in Film, ReFrame, and Time’s Up Call Disney Out for Its Abhorrent Attack of Scarlett Johansson in Legal Battle
Scarlett Johansson has been all over the news lately because she decided to stand up to the largest media corporation on the planet. Johansson alleges that her contract was breached by the decision to release Black Widow to Disney+ before giving it a proper t…
Ariel Fisher
Forbes
Disney Ignites A Firestorm By Dissing Scarlett Johansson: How To Damage An Iconic Company Brand In One Move
Instead of taking the high road in their public response to what is essentially a business matter — albeit an important financial one — they decided to go low and go mean. This needless move does significant damage to Disney's iconic brand.
Davia Temin, Contributor, Davia Temin, Contributor https://www.forbes.com/sites/daviatemin/