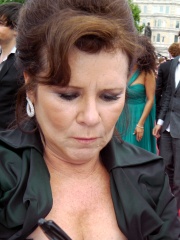 Imelda Mary Philomena Bernadette Staunton (born 9 January 1956) is an English actress and singer. After training at the Royal Academy of Dramatic Art, Staunton began her career in repertory theatre in the 1970s before appearing in various theatre productions in the United Kingdom. Staunton has performed in a variety of plays and musicals in London, winning four Olivier Awards; three for Best Actress in a Leading Role in a Musical for her roles in the musicals Into the Woods, Sweeney Todd, and Gypsy, and one for Best Performance in a Supporting Role in a Play for her work in both A Chorus of Disapproval and The Corn is Green. Read more on Wikipedia

Among actors, Imelda Staunton ranks 944 out of 10,030. Before her are Jean Dujardin, Roberts Blossom, Andy Whitfield, Judith Anderson, Rossana Podestà, and Stacy Keach. After her are John Noble, Joe Mantegna, Ricardo Montalbán, Til Schweiger, Rosanna Arquette, and Randolph Scott.