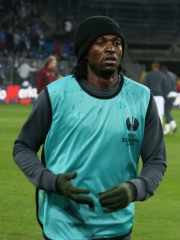 Sheyi Emmanuel Adebayor (French pronunciation: ​[ɛmanɥɛl adəbɛjɔʁ]; born 26 February 1984) is a Togolese professional footballer who plays as a striker. He previously played for English clubs Arsenal, Manchester City, Tottenham Hotspur and Crystal Palace, as well as French side Metz, Monégasque team Monaco, Spanish team Real Madrid, Turkish clubs İstanbul Başakşehir and Kayserispor, and Paraguay's Olimpia Asunción. He was voted African Footballer of the Year for 2008 while playing at Arsenal, and during his latter career, he became the most iconic signing in Paraguayan football and the highest paid player in the country's history when he joined Olimpia Asunción in 2020.Adebayor represented the Togo national team at the 2006 FIFA World Cup in Germany, the country's debut, and to date only, appearance at the World Cup. Read more on Wikipedia

Among SOCCER PLAYERS In Togo