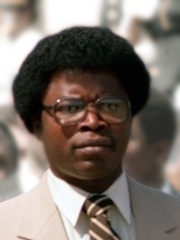 Samuel Kanyon Doe (6 May 1951 – 9 September 1990) was a Liberian politician who served as the Liberian leader from 1980 to 1990, first as a military leader and later as a civilian. While a master sergeant in the Armed Forces of Liberia (AFL), Doe staged a violent coup d'etat in April 1980 that left him de facto head of state. During the coup, then president William Tolbert, and much of the True Whig Party leadership were executed. Read more on Wikipedia

Since 2007, the English Wikipedia page of Samuel Doe has received more than 1,504,813 page views. His biography is available in 39 different languages on Wikipedia (up from 38 in 2019). Samuel Doe is the 6,901st most popular politician (up from 8,186th in 2019), the 4th most popular biography from Liberia and the 3rd most popular Liberian Politician.

Page views of Samuel Does by language

Among politicians, Samuel Doe ranks 6,901 out of 15,710. Before him are Cápac Yupanqui, Infanta Benedita of Portugal, Johann Fust, Namhae of Silla, Boutros Ghali, and Charles II, Duke of Brunswick. After him are Colville Young, Nikolay Chkheidze, Hatuey, Berdi Beg, Aristobulus III of Judea, and George Victor, Prince of Waldeck and Pyrmont.

Among POLITICIANS In Liberia