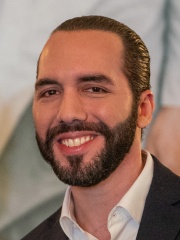 Nayib Armando Bukele Ortez (born 24 July 1981) is a Salvadoran politician and businessman who is the 46th and current President of El Salvador since 1 June 2019 after winning the 2019 election. Nayib Bukele ran as the candidate of the centre-right GANA party and became the first president since José Napoleón Duarte (1984–1989) not to have been elected as the candidate of one of the country's two major political parties, the FMLN and ARENA. He is also the founder of the political party Nuevas Ideas. He was previously elected mayor of Nuevo Cuscatlán on 11 March 2012. Read more on Wikipedia

Since 2007, the English Wikipedia page of Nayib Bukele has received more than 1,356,157 page views. His biography is available in 29 different languages on Wikipedia making him the 12,221st most popular politician.

Among politicians, Nayib Bukele ranks 12,128 out of 14,801. Before him are Andris Piebalgs, Lewis Cass, Toshikatsu Matsuoka, Domingo Nieto, Andrea Costa, and Vesna Pusić. After him are Frank Kabui, Seaxburh of Wessex, Bill English, Hui Liangyu, Myrtle Cook, and Duško Ivanović.