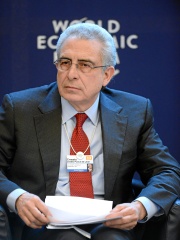 Ernesto Zedillo Ponce de León CYC GColIH GCMG (Spanish pronunciation: [eɾˈnesto seˈðiʝo]; born 27 December 1951) is a Mexican economist and politician. He was President of Mexico from 1 December 1994 to 30 November 2000, as the last of the uninterrupted 71-year line of Mexican presidents from the Institutional Revolutionary Party (PRI). During his presidency, he faced one of the worst economic crises in Mexico's history, which started only weeks after he took office. Read more on Wikipedia

Among politicians, Ernesto Zedillo ranks 5,791 out of 15,710. Before him are Muhammad I Tapar, Frederick I, Duke of Austria, John VIII, Count of Vendôme, Heonjong of Goryeo, Kido Takayoshi, and Hisham III of Córdoba. After him are Juan Velasco Alvarado, Charles II, Elector Palatine, Jamasp, Infanta Cristina of Spain, Samuel Adams, and Alparslan Türkeş.