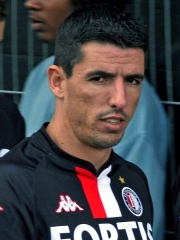 Rudolphus Antonius "Roy" Makaay (born 9 March 1975) is a Dutch football manager and former footballer who played as a centre-forward. He was known for his goal-scoring ability as a result of his "aerial prowess and quick drives to the net where he can put the ball away with either foot."He began his career at Vitesse and Tenerife before moving to Deportivo de La Coruña in 1999 and helping the side to their first La Liga title in his first season there. He also won the Copa del Rey in 2002 and the following season was given the European Golden Boot for a 29-goal haul. Read more on Wikipedia

Since 2007, the English Wikipedia page of Roy Makaay has received more than 764,654 page views. His biography is available in 41 different languages on Wikipedia making him the 714th most popular soccer player.