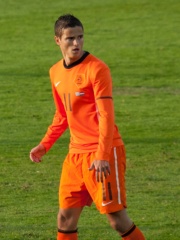 Ibrahim Afellay (Arabic: إبراهيم أفيلاي‎; born 2 April 1986) is a Dutch professional footballer who last played for Eredivisie club PSV Eindhoven as an attacking midfielder or winger. He played youth football at Elinkwijk before joining the PSV Eindhoven youth academy at age 10. After debuting in 2004, he represented PSV for eight seasons, helping them to four Eredivisie titles before moving to Barcelona for €3 million in January 2011. Read more on Wikipedia

Since 2007, the English Wikipedia page of Ibrahim Afellay has received more than 1,182,532 page views. His biography is available in 53 different languages on Wikipedia making him the 1,362nd most popular soccer player.