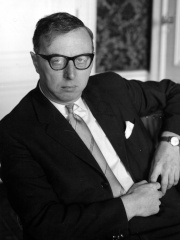 For other people named Zijlstra, see Zijlstra. Jelle Zijlstra (Dutch pronunciation: [ˈjɛlə ˈzɛilstraː]; 27 August 1918 – 23 December 2001) was a Dutch politician of the defunct Anti-Revolutionary Party (ARP) now the Christian Democratic Appeal (CDA) party and economist who served as Prime Minister of the Netherlands from 22 November 1966 until 5 April 1967.Zijlstra studied Economics at the Rotterdam School of Economics obtaining a Master of Economics degree and worked as a researcher and lecturer at his alma mater before finishing his thesis and graduated as a Doctor of Philosophy in Public economics and worked as a professor of Public economics at the Free University Amsterdam from October 1948 until September 1952. After the election of 1952 Zijlstra was appointed as Minister of Economic Affairs in the Cabinet Drees II taking office on 2 September 1952. Read more on Wikipedia

Since 2007, the English Wikipedia page of Jelle Zijlstra has received more than 42,841 page views. His biography is available in 25 different languages on Wikipedia making him the 9,814th most popular politician.