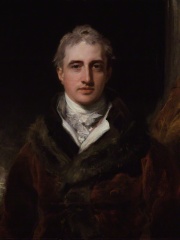 Robert Stewart, 2nd Marquess of Londonderry, (18 June 1769 – 12 August 1822), usually known as Lord Castlereagh, derived from the courtesy title Viscount Castlereagh (UK: KAH-səl-ray) by which he was styled from 1796 to 1821, was an Irish politician and a British statesman. As secretary to the Viceroy of Ireland, he worked to suppress the Rebellion of 1798 and to secure passage in 1800 of the Irish Act of Union. As the Foreign Secretary of the United Kingdom from 1812, he was central to the management of the coalition that defeated Napoleon, and was British plenipotentiary at the Congress of Vienna. Read more on Wikipedia

Among politicians, Robert Stewart, Viscount Castlereagh ranks 7,630 out of 15,710. Before him are Duchess Louise Charlotte of Mecklenburg-Schwerin, Joan, Duchess of Brittany, Elephant, Hugh III of Cyprus, Mithridates IV of Pontus, and Fan Ye. After him are Johann VI, Count of Nassau-Dillenburg, Shibi Khan, Yaakov Litzman, Idris II of Morocco, Paavo Lipponen, and Spyros Kyprianou.