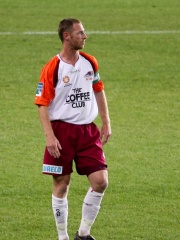 Craig Andrew Moore (born 12 December 1975) is an Australian former football player who played as a defender. His 2006 FIFA World Cup profile describes him as being "tough-tackling and uncompromising but also calm and composed under pressure."Moore, born and raised in the western Sydney suburb of Doonside, where he attended Crawford Public School and Doonside High while playing for the Doonside Hawks Soccer Club, is best known for his two spells with Scottish Premier Division / Scottish Premier League club Rangers. Having graduated through their youth system, he made 252 appearances for the Glasgow based club from 1993 to 2005, punctuated with a season in England with Crystal Palace in the 1998–99 First Division. Read more on Wikipedia