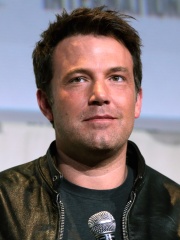 Benjamin Géza Affleck-Boldt (born August 15, 1972) is an American actor, film director, producer, and screenwriter. His accolades include two Academy Awards and three Golden Globe Awards. He began his career as a child when he starred in the PBS educational series The Voyage of the Mimi (1984, 1988). Read more on Wikipedia

Ben Affleck is most famous for being an actor and director.

Www.geo.tv
Jennifer Lopez and Ben Affleck face unexpected situation at Venice Airport - Geo News
<ol><li>Jennifer Lopez and Ben Affleck face unexpected situation at Venice Airport  Geo News </li><li>Ben Affleck Dodges Question About Jennifer Lopez  ET Canada </li><li>Celebrities Are Very Emotional After Reading Jennifer Garner's Family Update on Instag…
Web Desk
TMZ
Ben Affleck Enjoys a Smoke While Touring the Bronx with J Lo
Jennifer Lopez took Ben Affleck back to where it all started -- namely, the block that gave her her nickname ... and the dude seemed to make himself right at home by lighting up. Bennifer returned to J Lo's stomping grounds Sunday -- this after…
TMZ Staff
TMZ
Ben Affleck Confronts Pushy Fan to Protect J Lo in Venice
Ben Affleck knows boundaries, and when others don't he clearly takes charge, especially in the presence of his GF. Ben and J Lo were at the Marco Polo International Airport in Venice when a hyper-determined fan zeroed in for a selfie. The fan got…
TMZ Staff
GQ Magazine
Ben Affleck Sure Cleans Up Nice
And the rest of the Biggest Fits of the Week.
The Editors of GQ

Among people born in 1972, Ben Affleck ranks 5. Before him are Zinedine Zidane, Gwyneth Paltrow, Cameron Diaz, and Eminem. After him are Shaquille O'Neal, The Notorious B.I.G., Dwayne Johnson, Wentworth Miller, Rivaldo, Jude Law, and Big Show.