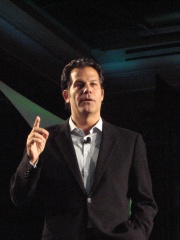 Richard L. Florida is an American urban studies theorist focusing on social and economic theory. He is a professor at the Rotman School of Management at the University of Toronto and a Distinguished Fellow at NYU's School of Professional Studies.Florida received a PhD from Columbia University in 1986. Prior to joining George Mason University's School of Public Policy, where he spent two years, he taught at Carnegie Mellon University's Heinz College in Pittsburgh from 1987 to 2005. Read more on Wikipedia

Among economists, Richard Florida ranks 335 out of 315. Before him are John B. Taylor, Bjørn Lomborg, Euclid Tsakalotos, Ludwig Lachmann, Clara Ponsatí, and Muriel Casals i Couturier. After him are Pier Carlo Padoan, Jagdish Bhagwati, Masaaki Shirakawa, Kenneth Rogoff, Guy Standing, and Frank Fetter.